I am writing a book about Crete, and need some information. I took the attached photo of a World War II memorial in 2000. It is in a small village the Nomos of Chania, but I have never been able to find it again. Can anyone tell me where the statue is to be found?

Dancing_Warriors_4.jpg   42.75KB   136 downloadsMy attempt to upload the photo failed. I will try again, but in case it doesn't work, it is a photo of four Cretan men, each holding a rifle, dancing on the body of a dead enemy. It is in the Nomos of Chania, but I have not been able to remember or locate the village it is in since I took the photo in 2000.

#18536 Well, Ladies And Gentleman, Boys And Girls. I Am Coming Back

it has been quite a while since I posted. Although I do drop in from time to time.

this time I am going to Crete from June 22nd until July 13th. Three weeks of bliss.

We are going to 4 different places Georgioupolis, Agia Galini, Paleochora and Chania. we have never been to Georgioupolis before and looking forward to it. 10 weeks from yesterday. the countdown started. And so

Pam if you still go to Kalives beach in the afternoons let me know. we could call down to see you both.

and if anyone has any  interesting suggestions, places or things to do around the places we will be I would be delighted if you would share them.

Very best regards to all

Hi Yvonne
this is Viv and I have just joined the forum and read your message.
We being my husband Pete and myself will be staying in Elounda at the Olive Garden from September 3rd
and would like to take you up on your offer to meet up while we are there also we are from Swindon!
look forward to hearing from you

Hi to you all, been a while since i was on here but have a problem, I have lost my disk during our last house move containing all my pictures I had posted on here in my gallery, I want to copy that gallery onto another disk, does anyone know how i can do that please.

I want to get hire in Crete, in Heraklion, Chania or Rethymnon. I coming there in a few days, can somebody help me with a job?

Hello All - Hooray - our flights to Crete are booked, we are flying into HER on 19th Sept, spending a few days in the East before heading West for a week in Kalives. Our daughters are flying in on the "Red Eye" on 23rd Arriving at 22.30. Can anyone recommend a reasonably priced hotel near HER airport so they can eat and sleep overnight before heading West to join us in Kalives on the Thursday morning. Also has anyone got any suggestions for car hire.

Ok so it has been established that Dinny will be having an Explore Crete Dinner each month this summer!!! Lucky Dinny.

Who is going to be around in September for an Explore Crete Dinner?
I will be here for all of Septmber, so dates aren't important to me.

Hi, Yvonne - having talked to Bob and confirmed our normal house-sitter can come, yes we would like to be there.  We'd be looking to stay overnight, preferably in Kritsa itself.  Do you know if the Argyro rent rooms have availability for that night? If not, we'd probably stay in Agios Nikolaus.  Looking forward to seeing you then.

SUMMER BBQ. Please help VOCAL (Voice of the Cats Alliance) with our fundraising efforts - AND come and have a good time too! It will be at Villa Jolyn in Pines (near Elounda) on Sunday 5th Sept, from 12 lunchtime. Tickets 7 euros each for lots of good food, including for veggies, drinks VERY cheap. Please pass this information on to others who may be interested.
Contact Vocal to buy a ticket.: vswain(at)miaow.info or Tel: 6944 807727

After the success of the Explolre Crete dinner in May this year, it was suggested that we do it all again in July!!!

I will be around 2nd-24th. I think Ton said he will be around the 1st week of July, obviously Dinny, Pam & Bob are already on the island & maybe Yannis can join us this time. Wim, what about you?

Ton has suggested that we eat in a village called Yeni Gave, apparently it's famous for spit-roasted meats, suckling pig in particular. Now I had serious problems locating this place on a map! all my Cretan neighbours knew it & were describing where it was, could I find it, no. Eventually I found it on the maps in The Battle for Crete & The Cretan Runner, so....... current maps, again NO. Eventually after many days of research I discovered the village is now called Dros(s)ia & hey I've now found it on several maps!!! It's on the old road from Heraklion to Perama/Rethymon, north west of Anoigia.

Any other takers for July?

Here we are, all dressed up in muted colours for the occasion, and our first job is to lie very quietly in the mud and see whatâ€™s happening. Read more at http://bit.ly/2dQ3J3z 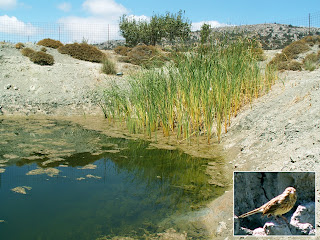 8 weeks for me to go on my annual holiday to Crete. This will be my 17th year visiting Crete. And, this year we are spending three weeks instead of the usual two weeks.

God I can feel the heat and taste the raki already.

Hi Pam and Bob, How are you both? do you still visit Kalyves in the afternoons??

#14738 See You At Man Airport Poppypiper

See you at the Airport Bill we have to check in 3hrs before,for the flight at 5am so we will be there early no sleep to night Rod

Last week we were prowling around an old olive mill and, somewhat unsurprisingly, this weekâ€™s stroll looks as if it is heading for an olive grove. Weâ€™ve covered olives and olive trees before (see Up The Olive Tree) so today I thought weâ€™d take a closer look at what goes on in the olive groves themselves. But first there are a few fruit trees planted along the edge of the grove and, a somewhat unexpected find, an ornamental rose. Although unexpected itâ€™s not totally out of place as I rather suspect that it was planted for its fruit rather than its flowers. The hips can be used for making jams, jellies, tea and are the central ingredient of the Slovakian national drink, cockta. That they have been used here in Crete since time immemorial can be implied by the appearance of them in the frescoes at Knossos which were painted some three and a half thousand years ago. 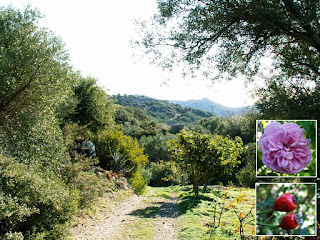 After last weekâ€™s stroll through the village of Agios Ioannis I thought we'd walk down the road for a bit and then cut across into the valley below where thereâ€™s an old olive press that Iâ€™ve long wanted to prowl around. But first, here growing wild at the side of the road is a magnificent straggling clematis climbing the rocks. 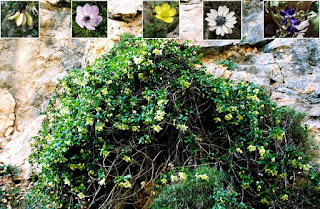 The Buttercup family - Ranunculaceae
Obviously, like anemones and delphiniums, itâ€™s a type of buttercup. No, I havenâ€™t finally taken leave of my senses they are all part of the Buttercup family, the Ranunculaceae. But how can such wildly different looking plants all be closely related? It all comes down to plant systematics, the biological classification of plants. A couple of hundred years before Christ was born, a wandering Greek philosopher called Theophrastus started us off by grouping plants loosely into trees, shrubs and herbs. Another Greek, Dioscorides who was a medic in the Roman army, refined this a few hundred years later when he classified over five hundred plants according to their medicinal properties and this became the standard reference work right up until the sixteenth century. Classifying plants by their similarities in structure then took over culminating in Linnaeus publishing his Species Plantarum in 1753 (he dwelt on their sexual organ arrangements but then, he didnâ€™t get out much). Darwinâ€™s publication On the Origin of Species in 1859 pushed us towards classifying plants based upon their evolutionary relationships and nowadays we use DNA analysis to refine that concept in the science of cladistics (see Taxing Taxonomy and Confusing Cladistics) and thatâ€™s why clematis is a type of buttercup â€“ they share a common ancestry.
Read on at https://niume.com/post/201221

I'm Mike Esson from Olomouc, the Czechlands and am cycling around western Crete from the 1st to 7th november. I'm in persuit of the dream home which should accomodate the 4 of us, Katka my wife, Robbie George ( 6 ) and Danny James ( 4 ). We would love advice on a non-touristy village within 8 kms of the coast where we could immerse ourselves in the Crete culture. I'm a painter and translator which gives me the opportunity to put bread on the table without journeying to the factory every day. Nevertheless i'd like to put my english teaching quals. to use by engaging in voluntary / symbolically paid work in a local school which wouldn't normally have the possibility / budget to accomodate a language teacher. This is in order to really get to know the local community and even sow the seeds of an unofficial bartering process.
If you know of an establishment which may invite my skills / input, i'd be duely grateful. Our vision is moving to Crete in sept. 2009 for minimum stay ( renting accomodation ) of 1 year which will hopefully evolve even into decades.
If our tracks have the possibility of meeting then i'd love to meet up with you folks whether it's an afternoon coffee chat or a good sit-down accompanied by a local speciality. I'm hitting the road from Heraklion on my raleigh with tent and an open mind. I'm an optimist with a little realism thrown in. Cheers, Mike

I'm planning to spend about a month in Crete in October. Can anyone recommend a place I can rent for one month, preferably in or around Rhethymno? Also, how much would it cost to rent a place? thanks!